He’s spreading the joy of crepes with Crepe Delicious 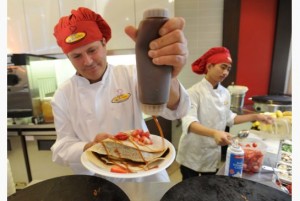 Oded Yefet didn’t set out to own a franchise business. But today, at 40, he’s president of the largest crepe franchise in Canada. Founded in 2004, Crêpe Delicious has 14 locations, including one in Alberta and several in Ontario. The 15th is set to open inCoquitlam, B.C., in November.

Before becoming a franchise maven, Yefet had a simple goal – introduce Canadians to the joys of a fresh, quickly served crepe. The Israeli–born Yefet, who owned a cateringcompany in Israel for 10 years, was inspired by the crepe carts he saw in Paris where “people would stand in line, sometimes for an hour,” says Yefet, who studied pastry-making in France.

After moving to Toronto in 1998, Yefet noticed the crowds that gather around hotdog stands. He began thinking about how to combine the two – Canadians’ love of street food with the delights of a fresh crepe.

Using a small business loan, Yefet launched Crêpe Delicious, a quick-service restaurant devoted to crepes. Yefet opened the first in Vaughan Mills, hoping that the then-new mall would draw curious customers who would return both for the shopping and for the crepes. The strategy paid off. Since opening, the Crêpe Delicious in Vaughan Mills has sold more than half a million crepes.

Asked what sets his operation apart from other quick-service options, Yefet points to the freshness of the company’s ingredients. “We don’t use any artificial products,” he says. “We cut everything fresh every morning.”

The variety of the menu also stands out. There are breakfast crepes featuring scrambled eggs. The list of entrée crepes includes Chicken Caesar, Tuna Tango and the Veggie-licious. And then there are the mouth-watering dessert crepes like the Tuttie Fruittie, which features chocolate hazelnut spread, fresh strawberries and bananas. For those not in the mood for a crepe, there are salads and panini sandwiches.

In the first year, Yefet had no plans to franchise his business but his curiosity was piqued when several customers emailed him asking if there were franchise opportunities. Yefet turned to the Canadian Franchise Association for advice.

“I read a lot of books from the CFA,” he says. Later, he hired a lawyer to write the agreements required to set up a franchise business.

Since then, the number of Crêpe Delicious locations has grown steadily. In 2009, the company added four locations. This year it will open three more. In 2011, expect up to eight to open, including one in the Toronto Eaton Centre.

Yefet visits each franchisee-owned location at least once a month. “I like to get to know my franchisees and my customers,” he says. He spends every weekend at Vaughan Mills, the sole corporate-owned location.

“I like to work in the store, especially on the weekend, when there are a lot of customers,” he says. The customer feedback is very useful, he adds.

Opening 14 locations has helped Crêpe Delicious become a household name, but it’s also brought some challenges. The menu is the same at each Crêpe Delicious, whether inWaterloo, Ont., or Rocky View, Alta.

But as Yefet learned, customers in Alberta have different tastes than those in Ontario. Figuring out which food items suit customers across the country is a continuing quest.Each month the company offers a crepe on special as a way to try out new recipes. And twice a year the company tweaks the menu, removing less popular items and adding new ones that show promise.

Yefet isn’t afraid to think big. Crêpe Delicious has already gone international. A location in Illinois opened in August. Yefet eventually hopes to have multiple franchisees in the United States. And the company is in talks with a potential franchisee about opening in the United Arab Emirates.

Closer to home, the newest Crêpe Delicious, which opened in early October, is also the first joint location for Froshberg Gelato, a new gelato company Yefet recently launched. The gelato company, which also features only fresh ingredients, was inspired by Yefet’s trips to Italy while studying Italian cuisine.

Now a franchise fan, Yefet set up Froshberg Gelato as a franchise business from the get-go. A website will advertise franchise opportunities. But for now, Yefet wants to test the concept at one location.

“We have to see how the customer accepts us before we start opening more locations,” he says. If Crêpe Delicious is any indication, expect to one day see Froshberg Gelato from British Columbia to Ontario.